There is a really good chance that this post contains affiliate links. If you click one of them, we may receive a small commission (for which we are deeply grateful) at no extra cost to you.
726shares

Mexican food conjures up images of burritos and tacos and quesadillas, guacamole and salsa, and if you’re into Tex-Mex, queso. But as it turns out, almost everything we thought we knew about Mexican food is wrong. We’re currently spending a month backpacking in Mexico and getting in touch with Jeremy’s Mexican roots (yep, my ginger, white AF husband is half Mexican). So while we’re busy stuffing our face with mole and tacos al pastor and learning how to eat like a Mexican, we’ve got an awesome Guest Post to share with you!

Our guest writer Lauren is a native Brit who lives in Mexico City, and she’s the brilliant (and beautiful) brains behind the Northern Lauren blog.  We were fortunate enough to meet up with Lauren while visiting Mexico City, and she treated us to a mini street food tour, so we can personally vouch for her discerning palate and ability to hunt down the best tamales, escalote, and ponche.

While Lauren’s interests range anywhere from Netflix to overthinking (girl, same), her blog Northern Lauren mainly focuses on practical travel tips for the Mexican capital and beyond, with a penchant for great food, cultural musings and a sprinkling of feminism thrown in for good measure.

Today she’s gonna school us on 10 authentic Mexican foods we’ve never heard of before: the good, the bad, and the ant larvae. Take it away, Lauren!

The following is written by Lauren, the Mexico City based Brit blogger behind Northern Lauren.

Living in Mexico has done very little for my waistline, given how cheap and available the street food is and how infrequently I can muster up the energy to go the supermarket and cook myself something for dinner.

Even so, it’s hard to complain about the food in Mexico, given how freaking delicious practically every corn, cheese and carne combination is. Tacos, tamales and tortas rule the international perception of Mexican cuisine, alongside the ever-faithful quesadilla.

That is, unless you’re living under the misguided impression that cheddar-covered burritos and chimichangas are authentically Mexican.

Even so, there are still plenty of weird, wonderful and, most importantly, authentic Mexican foods that most people haven’t heard of, from poisoned tacos to sweetcorn cake and the gloopy hot mess that is the pre-Hispanic drink pulque. OK, that last one is a drink and so not technically a Mexican food, but it’s so strange I couldn’t not include it.

Contentious menudo is made from cow’s stomach and is definitely an acquired taste. Original photo credit: “Menudo” (CC BY-SA 2.0) by davidmartindavies

Menudo is first because it’s the least obscure Mexican food on this list. You’ll likely find Menudo available at authentic Mexican restaurants all over the world! Menudo is a traditional Mexican soup made from red chile and cow stomach.

If you’re the sort of person who doesn’t mind the spongey texture of tripe – or knowing where it came from – then menudo’s rich broth is absolutely delicious. But if you’re the type who prefers not to eat cow’s stomachs, then menudo may not be for you.

That said, many reputable sources claim that it is the hands-down best hangover cure money can buy. But most of the. time I’d rather have a torta ahogada (baguette-style sandwiches filled with fried pork and fresh onion, doused in spicy tomato sauce).

READ THIS POST
The Best Wine Tour in Mendoza, Argentina: A Day of Wine Tasting with Mendoza Wine Camp

Tacos are nothing revolutionary and everyone knows that the Mexican fondness for this soft tortilla, meat and sauce concoction knows no bounds (I can’t stress enough how much hard taco shells are not Mexican).

However, if there’s anything you can say about Mexico, it’s that nothing is basic when it comes to Mexican food and there are a wealth of specialty, region-specific tacos that you can find in different parts of the country.

One of my favourite examples of this taco pride are the tacos envenenados from Zacatecas, which literally translates to poisoned tacos. Are you drooling yet??

Don’t freak out: the only poisoning you’ll be at risk at after eating tacos envenenados is a cholesterol overdose because my god are they greasy. They’re named that to protect the secrecy of the ingredients. Ooh, mysterious. 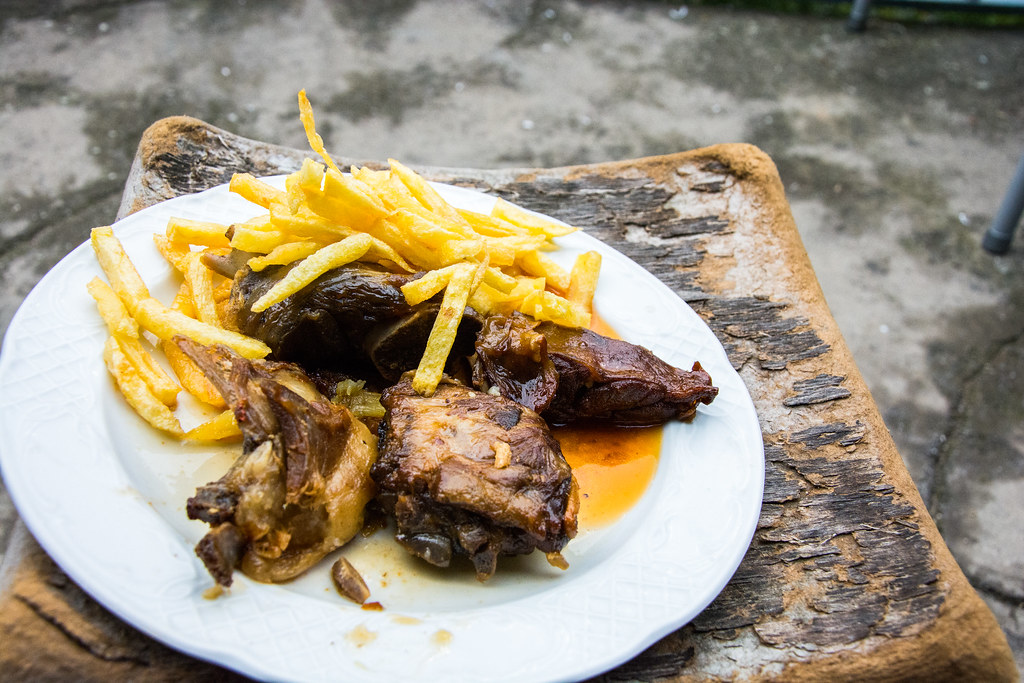 I’m ashamed to admit that, with all the trips I make to the spiritual home of cabrito, Monterrey, I still haven’t tried this. Cabrito is barbecued goat and a popular dish in all the northern states, but can principally be found in Nuevo León.

It may look wildly unappealing when you see it hung up before serving, but I’ve heard that it’s delicious. Why have I not tried it then, you ask. Well, it’s kind of pricey and I’m kind of stingy. But it’s firmly on my Mexico bucket list!

READ THIS POST
The Best Colombian Food: What to Eat in Colombia

If you speak Spanish, and can understand exactly what carne en su jugo means, there’s a chance this doesn’t sound all that appealing. I mean, ‘meat in its juice’, who wants that?

DON’T BE DECEIVED, SHEEPLE, because carne en su jugo is, honestly, so, so delicious. It’s like a watery meat stew and I know I’m not selling it with that description but you’ll just have to go with me.

Usually you throw in a ton of fresh diced onion, cilantro and spicy sauce before slurping it down and the best carne en su jugo in all of Mexico – yes, prepare yourself because this is a bold claim – is to be found at Guadalajara’s Karne Garibaldi in Santa Tere.

Look past the delicious spicy tinga in the foreground to that sad, gray-looking goop behind it. That’s Huitlacoche, aka corn smut. It’s one of the most obscure Mexican foods! And frankly, the grossest…. Original Photo Credit: “DE TINGA, DE HUITLACOCHE” (CC BY 2.0) by OrniCosa

Corn smut. I’m not being rude, that’s what huitlacoche translates to.

That’s honestly all I have to say about this greyish ‘specialty’ that tastes, to me at least, like dirt. I sampled some of my friend’s dodgy huitlacoche once and I’ve never wanted to give this corn disease (that’s what it is. It’s a corn disease) another go.

But like…feel free to try it if you’re the type who enjoys foods that have the word ‘smut’ in their name.

Another taco entry, that’s one of the more popular variations found in Mexico but perhaps not as well known outside the country – tacos de canasta, a.k.a. basket tacos. They’re named as such because they’re literally served out of a basket.

To be honest, it’s for that reason I shied away from trying them for ages, even though they’re super common in Mexico City, because everyone knows you shouldn’t eat lukewarm meat products.

In the end, I actually ended up eating them outside a bar one night while mildly tipsy (FYI, this is the way all tacos should be eaten). I recommend you order the potato ones.

I’m sure you’ve heard about chapulines, a.k.a. grasshoppers, but many people fail to realise that they’re not the only creepy crawlies that Mexican’s love to eat.

Everything from ant larvae – that’s what escamoles are – to worms (chinicuiles) are pre-Hispanic delicacies on the streets of cities like Oaxaca and the upscale menus of trendy Mexico City restaurants.

I’ve had friends from Northern Mexico tell me they used to eat live scorpions as children, and spiders are also available in a few choice spots.

Also, that worm at the bottom of your probably not-that-great-quality mezcal? That’s called gusano de maguey, and Mexicans eat those as well. I guess anything tastes better after it’s been soaked in alcohol for a while.

A pambazo is a torta that has been dipped in Guajillo sauce and filled with potatoes and chorizo, then fried until crispy. Yum! Original photo credit: “pambazo torta ” (CC BY-SA 2.0) by bpbailey

Only really available in chilangolandia (Mexico City), pambazos are essentially tortas – soft, overstuffed sandwiches – whose bread has been soaked in guajillo sauce prior to preparing and serving. For that reason, they have a distinctly red colour and are typically filled with potato and chorizo.

Full disclosure: I haven’t tried this dish yet because I know nothing can live up to Guadalajara lonches, crispy bread sandwiches served cold and stuffed with salad, meat and cheese – my favourite is ham and panela.

I cannot tell you how many times I’ve tried to like pay de elote with its intriguingly cool and creamy texture and just plain strange aftertaste of sweetcorn. Literally just a sweetcorn cheesecake-esque dish, pay de elote is one thing that I can’t get my taste buds around.

Perhaps it’s the fact that I wasn’t brought up with corn being such a radically staple part of my diet, or maybe it’s just because I always associate eating corn on the cob with butter rather than a biscuit crust. Either way, I know it’s nice, but I just can’t seem to enjoy it.

If you’re totally sold on buying into the literal meaning of sweetcorn though, other unusual Mexican corn-based dishes to sample include sweetcorn ice cream and sweetcorn bread.

Pulque is an alcoholic drink that you’ll only find in Mexico. Original photo credit: “pulque” (CC BY 2.0) by katiebordner

I mentioned this briefly in the introduction and am choosing to include it as my last entry because 1) I kept you hanging on in there for the big reveal and 2) it’s kind of, not really, definitely not even an obscure Mexican food, but rather an obscure Mexican alcoholic beverage.

Pulque is an alcoholic drink made from the fermented sap of the agave plant, which makes it sound like it would be sweet, but it kind of tastes sour and yeasty instead.

Given that it’s unstable consistency, production and storage methods make it practically impossible to export further than the central regions of Mexico where it’s produced, this gloopy drink is little known and lives in the shadow of big brothers Tequila and Mezcal.

Drinking it certainly makes for an interesting experience, but one that you can’t leave Mexico without having!

Fun fact about Pul: it’s insanely healthy and is filled with all sorts of minerals and vitamins. Try it in the curado form, where it comes with an added flavor like mango or tamarind!

Thank you, Lauren! For more of Lauren’s sassy, insider travel advice about Mexico and beyond, visit her blog Northern Lauren to read more of her posts, such as 10 Books You Must Read About Mexican Culture and 35 Things No One Tells You About Living in Mexico.

Hungry after reading this post? A Traveller’s Footsteps has a great guide to planning a trip to Mexico.

We also managed to publish a total of 1 post about our month and a half in Mexico (we are very good bloggers). Take a look!

Get the FREE Travel Planning Guide

Need some help planning your next adventure? Subscribe and we'll send you our FREE 22-page Travel Planning Guide. The guide includes everything from the hacks we use to save money on travel to 3 printable packing lists. We'll also send our favorite travel tips straight to your inbox!

Aww, yiss! You're the best. Hey, be sure to add [email protected] to your address book to make sure we don't end up in spam!

This site uses Akismet to reduce spam. Learn how your comment data is processed.

3 years ago we quit our jobs, put our stuff in storage, and took off on a (disastrous) year-long honeymoon. Today, we share down-to-earth travel tips from our many (mis)adventures on our blog and podcast! Low key stalk us here and on social media.

As an Amazon Affiliate, we earn from qualifying purchases.